Wacker was one of four teachers to receive a Spotlight Award at the event. She was recognized and celebrated in front of 150 of her colleagues and peers for her extraordinary work in the college classroom as well as a state competing and placing speech coach. 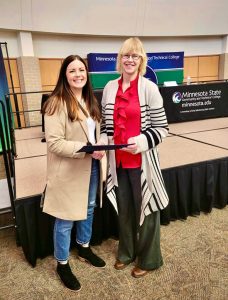 “I feel honored because my mentor, Roberta Freeman, nominated me and she has many people that she mentors,” Wacker said. “To know that she took the time out of her day to pay attention to what I am doing is an honor and it makes me feel really valued. The things that I am doing in my classroom are being seen and recognized beyond what my students are getting.”

“Wacker is a master teacher who utilizes a broad array of pedagogical strategies to ensure her students receive a college education akin to courses taken on campus,” Freeman said. “In addition to her excellence in the classroom, Wacker has become one of the most successful speech coaches in greater Minnesota. Recently, I was fortunate to judge students from her speech team at the MSHSL Section 6A and State Speech A Tournaments, where her team placed seventh in state. It is a pleasure to work with her competitive speakers and to observe her pedagogical mastery in the college classroom.”

Wacker has taught the College Public Speaking Course for five years. It was previously taught by her predecessor Sandra Wieser-Matthews. She has also been a Speech coach since 2009, taking over the Perham Speech team in 2017. In her first years with the Perham Speech team, Wacker served as an assistant to Wieser-Matthews. She also served as a coach at New York Mills.

Wacker said one of the wonderful things about teaching college public speaking courses is the skillsets taught in those classes really transfer to the speech team.

“I think this is the reason why so many of the students who take the college speaking and the extracurricular do really well,” Wacker said. “It is so much more of a rich experience for them instead of doing just one or the other. Public speaking is not easy work and it is work that takes time and preparation, it feels good to know that these students that receive these accolades really deserve them because they work extremely hard. I see this as recognition for the students too and I feel good about that.”

Wacker was honored along with the three other Spotlight Award Winners at the Concurrent Enrollment Day on Oct. 27. Wacker said it was an honor to be recognized for this award with the three other winners, who she has worked with and competed against during her time as a Speech coach.

“I knew them from teaching and from the speech world. They are amazing humans and to be up there with them felt incredible,” Wacker said. “The other three recipients are veterans within teaching and coaching. They have won state in Class A and AA and others have been in the top five at state. They are incredible humans in general. To know that I am considered even with them and the program that I am lucky enough to coach is considered with them and their teams, I do not know if I have the words to describe it.”

Wacker is extremely grateful for the support she has received from her mentor. Wacker said she has been an inspiration to her in most aspects of her teaching.

“She is a great leader and an excellent teacher,” Wacker said of Roberta Freeman. “She is a really great person and the recognition coming from her means a great deal.”

Minnesota-State’s Megam Adamcyzk said M-State’s Concurrent Enrollment Program and District 549 are incredibly fortunate to have Ms. Wacker in our shared classroom and as a coach and mentor for our shared students.