For many students in the United States the night of February 23 was just another night. However, for one 15-year-old in Perham, Minn., it was a restless night. In the case of Bohdan Cherkay, his home country of Ukraine was being invaded by Russia.

Bohdan came to Perham as part of a Foreign Exchange Student Program sponsored by the United States Government. He is one of 5,000 participants that applied for the program, however, just about 200 were selected. 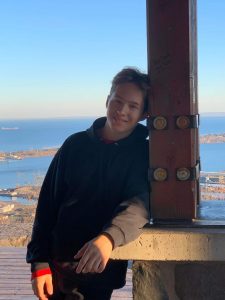 It was a struggle for Bohdan when he found out that Vladimir Putin and Russia were invading Ukraine. However, it is a struggle that he has dealt with for more than half of his life. For years, Russia has threatened to invade but now they have. He said the war has been ongoing since 2014 and he has lived in fear because of that threat.

“All of those eight years, I lived in some sort of fear, because every day you do not know when the situation will escalate. Maybe, they will attack us today. It is some sort of fear that you get to live with it. You must accept it and it is always in your head. You have to get used to it. The fear never really leaves you, sometimes you forget about it, but it doesn’t just disappear. It is scary but you just get to live with it,” Bohdan said. “Eight years out of the 15 years I have lived, I have spent with fear for my, my parent’s and my friend’s future.”

His father is an ex-soldier who was drafted back into the Russian-Ukrainian War. It is not his first experience with war as he was in service during a war in 2014. Bohdan, an only child, lived with his mother when his father went to war for a year. He said the war has influenced his family.

“I am happy that he is safe and alright. That year it was scary because every day you contact him and ask how you are doing, are you okay, and when will you be back home? It was scary then, and it is scary now. But right now things are even more different, because at this moment I am away from my family and friends,” Bohdan said. “I contact them every day to see how they are doing and to see if they are all right. My mother stays at home and my father has been drafted. My city has been attacked too, but luckily my parents are alright. However, you don’t know what the next day brings to you”

“I do not think I fell asleep that night, but I still decided to go to school because hiding from it will not make it any better. I just had to face it. When I came to school, I thought I would be strong and be able to answer all the questions,” Bohdan said. “When I first started talking about it, I experienced a breakdown, but it helped me to get it off my chest. After that, it was easier. After that I started talking to others. It was important to me to get it off my chest and tell others about what was going on. Because I felt a need to share it, so they could know what is really going on.”

One of the things that continues to help Bohdan through the challenging times of being away from his family and his home country during this time is his peer group here in Perham. Bohdan said they have really helped him during this time. 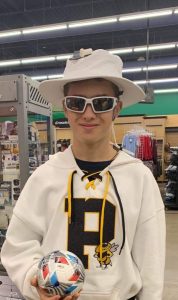 “They all really helped me during these hard times. They supported me everyday just by asking questions such as, “how are you doing and how can I help you?” Bohdan said. “What is even more important to me, is that they didn’t treat me as a refugee or some kind of an outsider, but as their friend whom they have known for a long time. It definitely helps me and I appreciate it. That is what everyone can do for anyone. Show support, that’s all you need to do to help anyone.”

Along with his friends in the United States, Bohdan has stayed connected with his family and his friends in Ukraine. He said they have helped keep him up to date with recent events involving the Russian Invasion.

“I have been in contact with them through social media. They tell me all the events that are going on out there. They tell me if it is safe there or if something happened. It is scary for me because I do not know what it is like out there,” Bohdan said. “I do not know what the next day will bring to them. I understand that here, I am safe. I am worried for those who are in Ukraine right now. They are going through it, and they are always in danger.”

His friends in Ukraine are one of the main reasons why he decided he needed to do something to help. He said it was ridiculous and hypocritical for him to tell his friends not to worry, while he was sitting in the United States in safety.

“That is one of the reasons why I decided to do something, to work on this fundraiser. I cannot just tell them not to worry while being safe here. It just feels wrong. I felt a need to do something that will help them and maybe save someone’s life,” Bohdan said. “I feel like I must do something. By sitting here and just watching the news, I am not doing anything. If an opportunity presented itself and I didn’t act, I would regret it for the rest of my life.”

Bohdan said sharing his story about life during a war is a way of helping people understand what life is like during a situation like this.

“A lot of people do not completely understand what war is. I don’t blame them for it, because I also don’t see everything, I don’t see it the way my friends see it right now. I just want people to understand that elderly, women and children have to run from bombs, somewhere where they will not get you, run from guns of Russians who came to “save us” from ourself, but instead kill everyone.” Bohdan said. “Someone out there is needing help right now and I believe we can help them. If we can save a single life, then it’s all worth it.” 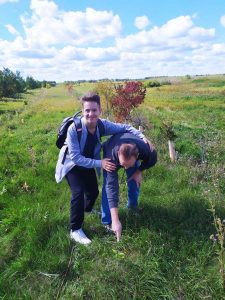 Just like everything that has been put in front of Bohdan, he continues to face it head on. He said he has no choice in the matter. One of the biggest fears he faces is not knowing what will happen next. As a part of the program that he is in, many of the Ukrainian foreign exchange students do not know what will happen next.

“What if some of those exchange students, who are staying in the United States, may not ever meet their families again?,” Bohdan said. “Will they be sent to foster homes? What is going to happen to their lives?”

While the future is uncertain, Bohdan and his classmates at Perham High School have produced several fundraising ideas to help support his country mates in Ukraine. The student council hosted a coin drive that raised $1,702.40. They will be hosting a Muscle Ball Tournament on April 22 to help raise money as well for Ukraine. The tournament will be held at the Hive from 6 to 8 p.m. A free will donation will be accepted at the door and spectators are asked to wear blue and yellow.

It will feature five teams with one from each grade level and a team full of Perham High School staff and local Rotary members. The teams are battling for the muscle ball trophy, which was created by Jacket Manufacturing. The event will have concessions, including Pizza Ranch pizza and ice cream sundaes. All proceeds for the event, hosted by the Student Council, will go towards Ukraine.