The Perham Yellowjackets had an excellent showing at the Minnesota State High School League Speech Meet on April 22-23. Overall, the Yellowjackets sent 10 competitors to the meet with four of them advancing to the finals. 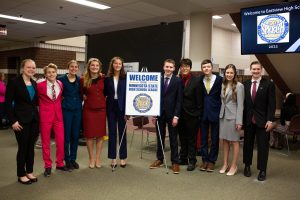 The state performance capped off a strong season for the Yellowjacket speech team with theYellowjackets finishing seventh in the state as a team.

Perham head coach Kasey Wacker said they asked quite a bit of the team compared to the past two years when they were forced into virtual competition due to the COVID-19 Pandemic. She said being back in person meant more hours, more public appearances and more commitment.

“I can honestly say everyone of the members of our competitive team rose to the challenge. We have so much to be grateful for–advancing Beau (Johnson) to Nationals, taking both subsection and section titles, bringing 10 speakers to state with four advancing to finals, and placing in the top 10 at state,” Wacker said. “But, what brings me and the other coaches such great joy is knowing that our team has passion, dedication, and resilience beyond measure. We are excited for our seniors who are graduating and taking their speech skills to the next level. We are even more elated that we have a powerful up-and-coming team who will be sure to keep the competitive legacy of the Perham Speech Team thriving for years to come!”

Roman Guajardo had the best finish for the Yellowjackets with a second place finish. Guajardo, a sophomore, is in his fourth year of speech and finished second in subsections, third in sections and followed it up with a second at state. He said he was relieved when he found out his results.

“I was super nervous during the awards ceremony,” Guajardo said. “Believing I wasn’t going to make it, I just wanted an answer.” 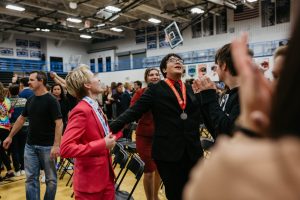 Guajardo said he loves the environment the speech team provides and loves expressing himself. The thing he said that makes speech challenging is leaving your comfort zone and taking that leap of faith.

Anya Roe competed at state for her second time in her high school career. She finished first at subsection, second at sections and was third at state. She said she felt ecstatic when she found out she was going to state.

“It was amazing to see that all the hard work we had put into the season paid off,” Roe said. Roe’s favorite thing about speech is that you have a voice. She said you can convey whatever message you believe people need to hear and you can meet new people that are just as passionate about the subjects as you are.

Roe was an All-State Speaker for the Yellowjackets during the 2021-22 speech season. She said she will be forever grateful for joining the speech team her freshman year.

“It gave me skills that will last a lifetime and an amazing team,” Roe said. “This team is so welcoming and truly feels like a family. I’m proud of each and everyone of my teammates for all of the hard work that they’ve put in this season.”

Beau Johnson completed his fourth season with the Perham Speech team and capped the season off with a third place finish. Johnson said he was beyond elated to compete at state since it was his first and last time competing in a state meet for the Perham Speech Team.

Johnson finished first at subsection, first in sections and third at state. Johnson said the most challenging thing is staying accountable with practice all the way to the end of the very long season. 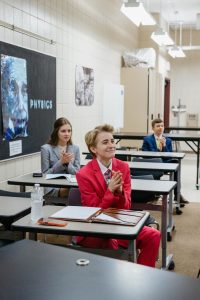 “I enjoy speaking to new people honestly,” Johnson said. “You meet tons of other people with all the same passion for speaking. I love everything about it.”

Brynn Greisen finished eighth overall at state for the Yellowjackets. Her focus this year was Great Speeches and that’s where her heart lies.

“I enjoy everything about speech,” Greisen said. “I love that I get to spread messages that I am passionate about for other people’s lives.Advocacy is something that speech gives me. My voice is heard all around the state for four months out of the year.”

Greisen served as one of the three team captains and said she was excited for herself and her teammates after their strong finish at state.

Greisen captured first at sections and subsections, before finishing eighth at state.

Greisen said she is already getting set for next season.

“I cannot wait to get back at it,” Greisen said. “This team is truly a family. Not seeing each other everyday at practice is so strange.”

The Yellowjackets graduated just two, Johnson and Roe, from the 10 that competed at state.

The members of the state team can all agree that it was one of the best decisions they have made during their high school career and they are looking forward to next speech season.