The following is the seventh in a series on Independent School District 549 retirees for the 2022 school year.

A familiar face with the Heart of the Lakes Elementary has announced her retirement at the end of the 2021-22 school year. Sue Kalseim announced she will be moving on to the next stage after the school year. 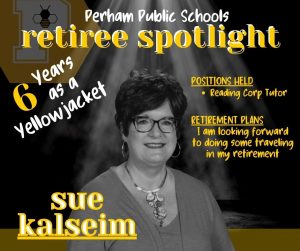 Kalseim spent four years with Reading Corps and two years with the Heart of the Lakes Elementary school during her time within Independent School District 549.

Kalseim held the position of Reading Corps Tutor. With ISD 549 she served as an interventionist, helping kids with their reading skills.

Kalseim said her favorite memories at Perham Public Schools come from working with Kindergarten students. She said the looks on their faces when they sound out their first word are memories that stand out to her.

Kalseim said she is looking forward to traveling during her retirement. When asked what advice Kalseim would give to new or younger members in her profession, she said to “hang in there, it’s worth it.”