The following is a second in a series on Independent School District 549 retirees for the 2022 school year. 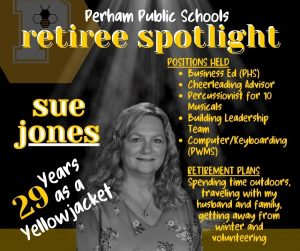 Jones is a Computer/Keyboarding instructor at Prairie Wind Middle School, she also taught Business Education at Perham High School, served as a Cheerleading Advisor, Percussionist for 10 musicals, was on the Building Leadership Team, taught and served on several interview teams during her tenure with ISD 549.

During her time at Perham Public Schools, Jones received her Master’s Degree from Hamline.

Jones has several great memories from her time at ISD 549. She said it is hard to just pick one.

“Playing tricks on Denny Drummond. We used to re-enact the Underground Railroad with kids at night from the golf course to Paul Miller Park,” Jones said. “I loved being a part of the musicals.”

Jones said she plans on spending time outdoors with her retirement. She hopes to travel with her husband and family as well. Jones said her travel bucket list includes Banff, Alaska, Anguilla and Ireland.

When asked what advice Jones would give to new teachers. She said, “Join a team and work together. It is okay to crash and burn as long as you learn from it and come back better.”