The following is the first in a series on Independent School District 549 retirees for the 2022 school year.

After 34 years working with kids and promoting the sciences, Prairie Wind Middle School teacher Rondi Ulmer will retire from her position with Perham Public Schools.

Ulmer spent 31 of her 34 years with Independent School District 549. Prior to her time in Perham, she taught for three years at Borup High School.

Ulmer worked with the “Clean Up Batter’ for Science for her first two years, which was part of a ninth grade physical science, biology and ALC program. Following her first two years, she became an eighth grade Earth Science Teacher. It’s a spot she has maintained for 33 years. 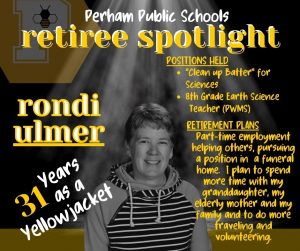 Ulmer has received several awards during her tenure with Perham Public Schools. Recently, she was named the Minnesota Association of Soil and Water Conservation Districts 2021 Teacher Award for creating innovative conservation education activities for reaching students. She was ISD 549’s Teacher of the Year in 2020. In 2018, her students had the eighth highest MCA Science scores in the state. In 2001, PWMS was a Pilot School for the Minnesota State Education and Environmental Roundtable’s Environment as an Integrating Context. This program eventually led to taking eighth graders to the Laurentian Environmental Learning Center for 19 years. In 1995, She received MREA’s Profiles of Excellence Award for Technology with Becky Rennicke and Les Gunderson. She was a part of the International Arctic Project in 1995. She met and had students follow Will Steger’s expedition across the Arctic with Rennicke and Gunderson. Along with the expedition in 1995, she teamed with Rennicke and Gunderson on being state representatives for Pioneering Partners in Educational Technology.

Ulmer has several great memories of her time at ISD 549. She said working with Rennicke and the trips to the Laurentian Environmental Learning Center are ones that stand out.

Ulmer plans on staying active during her time in retirement. She plans to find part-time work helping others. She said she will be pursuing a position with a funeral home. It is something she has done in the past and found it to be very rewarding.

“I am blessed beyond what I deserve to have spent 31 years in this community,” Ulmer said. “I have worked for two awesome principals, Kitty Krueger and Scott Bjerke. I have had a wonderfully supportive eighth grade team and we have done good things for kids. I was mentored by the very best, Rennicke and Gunderson. It is hard to leave, but it is time.”

Ulmer said she has a couple of tips for new people in the profession.

“Love the age group you teach and love the content you teach and you will never work a day in your life,” Ulmer said. “Keep a journal of the good and bad memories because one year blends into the next and at some point, you will want to look back.”