The following is the sixth in a series on Independent School District 549 retirees for the 2022 school year.

A beloved member of Perham Public Schools announced her retirement after 28 years with Independent School District 549. Moe Christensen announced it was her time to move on to the next chapter of her life after the conclusion of the 2021-22 school year. 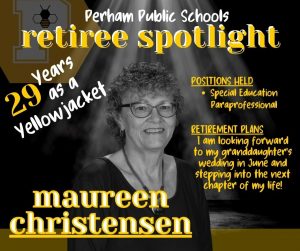 Christensen has spent her time working with students in special education and said her favorite memories at Perham Public Schools involve their special prom and annual Christmas Party.

When asked what advice Christensen would give to new or younger workers in the district. She said to “be patient and kind!”

Christensen said her plans for retirement involve stepping into the next chapter of her life, which will begin with her Granddaughter’s wedding in June.