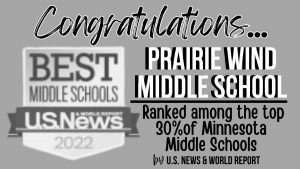 PWMS Principal Scott Bjerke said the recognition is well-deserved for our team at PWMS.

“I’ve always said that I am fortunate to be surrounded by so many talented people that get it,” Bjerke said.

According to the U.S. News & World Report, schools were assessed on their pupils’ proficiencies in mathematics and reading, as measured by state assessment tests. Half of the ranking formula was the results themselves; the other half was the results in the context of socioeconomic demographics. U.S. News & World Report has published rankings for more than 47,000 public elementary schools and more than 23,000 public middle schools, according to their website.

Bjerke said the staff are experts at their craft, which means they don’t need him micromanaging them.

“They also understand middle school students, that alone deserves an award,” Bjerke said. “We try to show up every day with the following mindset/attitude: have fun… and get a lot done!”