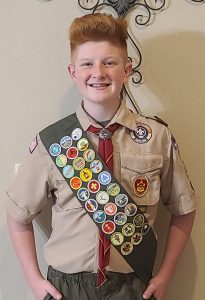 Brown will be recognized in ceremonies on March 20th, 2022 at the ITOW Museum in Perham. Doors open at 1:00pm, ceremony will begin at 1:30pm. Everyone is welcome to attend.

A member of the Perham Rotary Club, Troop 321, Jayce Brown is one of approximately 6 percent of all Boy Scouts who attain the Eagle rank worldwide. In the United States that percentage drops to  less than 2%, so it is extremely rare, according Scoutmaster Steve Felt.

Each candidate must earn 21 merit badges and successfully complete a community, church, or synagogue-related service project to earn his Eagle; Brown chose to build picnic tables for Scout Park.

During the process of his project, he contacted local businesses and organizations to help with funding. He was excited to have an abundance of help including Crane Johnson Lumber, Ace Hardware, Perham VFW Post 4020 and the Auxiliary, Perham Fire Department as well as their members and Thrivent.

Next, he was in need of help to build the tables so he asked his fellow Scouts and they all were happy to help, but he knew they needed adults to help since Scouts aren’t allowed to use power tools. So what better group to ask than the Perham Fire Department. Brown attended a fire department meeting asking the group to help him build the tables, of which they agreed to help. Not only did they agree to help him build his tables, the members pitched in to help with his fundraising efforts.  “I didn’t realize how fast Firemen worked until they helped me build the tables. They aren’t only fast at responding to emergency calls, they can build 6 picnic tables in less than 2 hours”, said Brown. The best part was, they didn’t just help build the tables, each group took scouts under their wing and showed them how to measure, what tools to use and why. It was a great experience for all of us. We really enjoyed working with them, said Brown.

Brown completed his Eagle Board of Review on November 30th, 2021 and recently received final approval from the National Boy Scouts of America, said Scoutmaster Steve Felt.

Brown plans to continue in Scouting. He enjoys being a part of this group and wants to encourage other scouts to work to get their Eagle Scout rank. He plans to attend the National Jamboree in West Virginia in 2023.