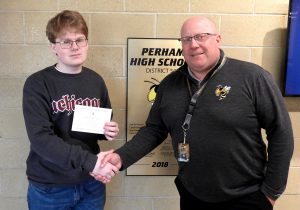 “I did not know that it was going to happen. When I originally got my PSAT score, I knew it was good, but it was outside of the range that was expected for the National Merit Scholarship. I knew I was not going to get the scholarship itself, but just being recognized and being in the running for it, is cool,” Brown said. “It is crazy. You think that is a lot of people (50,000) but on the scale of how many high school seniors there are that took the PSAT, that is not very many.”

Brown advises younger students and classmates to always pay attention, always learn and always improve their study habits. Brown intends on attending a four-year college after high school majoring in Philosophy. If that is not offered at the school he plans on attending, he will look into the English field with a Literature emphasis. After he finishes his four-year degree, Brown said he intends on going to law school.

Brown, in his spare time, which is limited since he works at Pizza Ranch after school and is involved with the Knowledge Bowl Team and the Pep Band, likes to play chess, cheer on the Vikings, and loves watching football and baseball. He fishes in the summer and is an active member of his church. Brown has been involved in Knowledge Bowl since seventh grade and said it has had a significant impact on him.

“I love the competitiveness and the atmosphere with people who enjoy that kind of trivia and do my best at meets,” Brown said. “It is competitive, but you are not competing against each other. Everyone is trying to build each other up. If someone knows something and you know something else, you exchange ideas, and everyone is learning something.”

He said one of the keys is taking advantage of the resources that are available to students.

Brown said the main thing is just believing in yourself, try your best and do not say it does not matter.

“Always try your best in everything and just be yourself, which is what it comes down to,” Brown said. “If you are putting however many hours studying, or playing a sport–just do yourself, do what makes you happy.”