Patrick Murphy’s 2022 closed quietly, but his 2023 will open with a bang when he goes on tour as the opening act for country music sensation Maddie and Tae. The 2016 Perham graduate stopped by Perham High School just before Winter Break and talked about his past year and upcoming spring. Full interview with Patrick Murphy can be found at the bottom of this story.

Murphy currently resides in Nashville, Tenn., and is a Warner Recording Artist. He will begin touring with Maddie and Tae on March 16 at the Majestic Theatre in Madison, Wisc., with trips to Ohio, Indiana, Kansas, Nebraska, Michigan, Kentucky, and Maine on the spring tour. 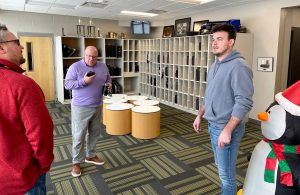 During his stop, Murphy visited with students at Underwood High School and opened their eyes about what he is currently doing in Nashville. Murphy is a singer and a songwriter with several of his songs having been picked up by top Warner artists.

“(It was) super fun. To me it was great to talk to kids who are getting ready to move on to the next chapter of their lives and college and figure out where they want to go,” Murphy said. “To be able to open up the music industry, which is a far distance from Perham, or Underwood, for that matter, and to get to open them up to some things they may not get to know much about and to expand what’s available in the music industry other than what I do which is a singer and a songwriter.”

Murphy said growing up and attending St. Henry’s and Perham High School had an impact on him and where he is at today. He said the instructors gave a lot of people the opportunity to be a solo performer compared to being in a choir and allowed students to see what else was out there in terms of performance schools.

“I went to Belmont University and did not pursue a performance degree; I did a music business degree. A lot of that came from the classes I took here, which showed the importance of the business side of things and not the artistic side of what I do,” Murphy said. “All the people that I had as instructors, teachers and friends and a lot of that played into why I decided to go where I went. “ 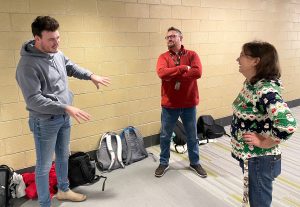 Murphy credits growing up in rural Minnesota and helping his father with the Dairy Farm Supply Company, which helped him fall in love with Country music. Murphy said he grew up listening to a lot of Rascal Flatts and Keith Urban.

“I grew up in a very faith-filled family and a lot of the messages I heard through country music were that which made me fall in love with country,” Murphy said. “Eventually, when I moved to Nashville and found how welcoming and supportive everyone was there, it really made me more appreciative for country music and made me excited to be a part of that group of artists and musicians.”

Murphy said a lot of the groundwork has been set through building relationships in Nashville, which helped him land the opening spot for the tour with Maddie and Tae.

“It was all based around relationships. My manager is a part of a larger management company called Red Light Management, which is where Maddie and Tae are and have the same booking agent as I do,” Murphy said. “You hope that while on tour you can build on the relationship with these two insanely talented people. If anything is building that relationship. It happens fast. You have two weeks with a lot of things happening.”

“Everything you can feel like is going backwards again and then all of a sudden everything starts rolling again,” Murphy said. “It was an out of the blue thing for me. I do not know what was happening behind the scenes, but I did not know we were going to get the whole tour until a week before we announced the tour.”

One of the unique things about life on the road is getting to see many different cities. Murphy has always enjoyed traveling and said playing the show is about two percent of the time on the road. On the tour, Murphy will get a 30-minute set at each stop.

Returning to Minnesota has provided a few personal highlights during his music career. When Murphy was younger, he won a talent contest at the county fair and had the opportunity to play at the grandstand at the Minnesota State Fair. Last year, he was the opening act for Maren Morris on the grandstand. 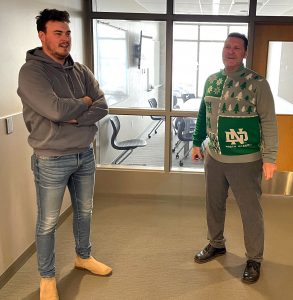 “It was cool to have the full circle moment from winning a contest to having my name on the ticket of that lineup. That would be the coolest big show,” Murphy said. “I always love coming back home and playing shows. One of the cooler shows was playing the show here at the new gym. It was fun and showed a lot of my friends how supportive Perham is. To have a thousand people in the gym to see someone who graduated from here was special to me and to have that kind of support and to know it is still here. There are few places like Perham that are as supportive. To be able to play a show at my high school was cool.”

Murphy said it feels great to receive the support and feels like nothing has changed when he returns home. He enjoys seeing familiar faces in the community. He said it makes him realize how much support he has and really encourages him to continue his musical aspirations.

Here is the full interview with Patrick Murphy.