Ashton Hendrickson exhibited his Columbia Sheep. For Hendrickson the work started the year before during the Fall to have them ready for the state fair. Hendrickson’s preparation included breeding selections, ewe care during pregnancy, lamb care after birth and finally evaluating the lamb crop for the best of the best. Hendrickson’s Corriedale Ram brought home champion. The process for Hendrickson is a grueling one that includes a call back session. 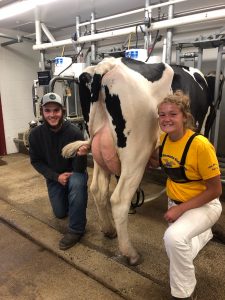 Hendrickson is the son of Robert and Shanna Hendrickson and they were honored as a Legacy Family at the Fair. It means that Ashton was the fourth generation of FFA members to show at the state fair. All four generations were present to watch Ashton receive his honors: Great Grandfather Rowland Bauck, Grandma Dyann TIgges and his mother, Shanna Hendrickson, were in attendance.

Also, exhibiting at the state fair was Macey Minten. This was her first year exhibiting at the state fair with her 3-year old cow. MInten has tremendous passion for the dairy industry and is proud to share that even though she didn’t win any purple ribbons, she was recognized by a state judge for having such a high quality animal was exciting for her. She is the daughter of Mike and Jen Minten. Macey plans on continuing her breeding program and take advice from the judges and return next year, working just as hard. 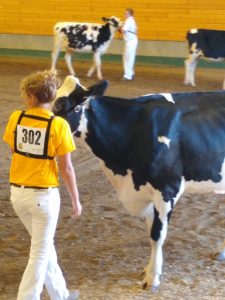 In his final year of competing, James Minten put the second to last stamp on his FFA experience. Minten is the son of Mike and Jen Minten. He will receive his American FFA Degree this October and complete the trifecta of degrees.