Teacher of the Year

Karkela has served the district for many years and has continually shown support for her colleagues and students at Perham High School, Perham Education Association’s Ryan Hendrickson said in a statement to the staff of ISD 549.

One of Karkela’s colleagues said, “Mary is dedicated to her craft and takes her role as mentor very seriously. She continues to bring laughter and love to her job each and every day.”

Karkela said she was overwhelmed when she first heard the news of being named Teacher of the Year. Karkela has been in the Perham-Dent School District for 24 years.

“I honestly just sat and laughed a little bit because I did not in a million years ever expect that,” Karkela said. “It is certainly and honor to be recognized by my peers.”

Karkela said her favorite thing about teaching is the connection with the students; getting to know them, being able and hopefully a support to them, by talking to them about their classes or something they are bothered by in life in general.

“The second-best part is the people that I work with. There is such an excellent group of teachers here in Perham,” Karkela said. “They have been a great support to me.”

Karkela was asked to take on an additional role by facilitating online classes to students in a distance learning model.

Hendrickson said she has risen to the task because for Mary, the students come first.

Karkela said it has been challenging taking on Jacket Academy.

“It’s been challenging because I’m learning a whole different way to work with these students and trying to figure out a way to help them along because they are very much doing the work on their own,” Karkela said. “We have some that probably need a little more prodding than others. It’s an eye-opening experience and a chance to learn something new, too.”

Karkela said it has been a unique time as a teacher and was telling one of her classes the importance of staying connected with each other. She said the connection she has with her students has been great.

“I feel like being with the students like this has kept me young and given me new perspectives,” Karkela said. “It’s taught me to remember that everyone has their own life and going through their own difficult times. Don’t judge and don’t put a stamp on people and say this is what they should be doing.”

Karkela said she often looks at who has received the award in the past and said she was honored to be joining that group.

“I often look at who has been teacher of the year and some of them have been science teachers, math teachers and social studies. They are excellent, excellent people,” Karkela said. “When I realize I get to be a part of that group, it was very overwhelming. I was pretty excited and honored.”

PEA Member of the Year

Seip has grown from ISD 549 school nurse to being ISD 549’s first line of defense for COVID-19 response. Hendrickson said she has graciously accepted this new role and works tirelessly with county public health to effectively keep students and staff safe as possible during the pandemic. 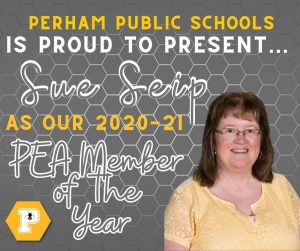 As the numbers continue to rise, this has proven to be a daunting task and one that is virtually insurmountable, Hendrickson said in the release.

“Through all of this, Seip never backs down from this challenge,” Hendrickson said. “She continually performs the essential functions of her daily job while also maintaining a workable, safe environment for all who enter the doors of ISD 549.”

Seip said she was surprised when she was named the PEA Member of the Year and it was a humbling feeling.

“I was very surprised, and I can’t be grateful enough for our students, staff and families who have been so cooperative with this whole pandemic that we are going through,” Seip said.

Seip said she has logged lots of long hours during the pandemic. She said her co-workers and families have been helpful with contact tracing, but it has been a lot of long hours.

Seip is a district employee and has been the school nurse for 13 years. She said her favorite parts of the job is working with the students, their families, and the staff, along with helping the kids to be as healthy as possible to be able to be at school.

Seip said the connections she has made have been good during her time with the school district. She said it is fun getting to know the families.

“One of the nice parts about being a district employee is you get to know the kids from early on until they graduate from school,” Seip said.

Seip said it has been an unusual year, but people have been cooperative.

“As unusual as it’s been for everybody, it’s been really neat to see everyone work together so well,” Seip said.