Word of that traveled through town and inspired a plan for Christmas time. An anonymous donation was made to the school which entailed more than 100 boxes of food to be distributed throughout the school district. 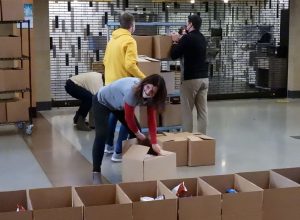 Lakeland Mental Health Center’s Courtney Rooney said they wanted to continue, and she received a phone call from the donor with some ideas to help. Rooney said the donor asked if they could sponsor a family, but I said instead, we could do some holiday meals. We were graciously awarded 100 boxed food gift packages that we could give throughout the Perham-Dent school district, Rooney added.

Rooney said the response has been awesome from members of the school that are helping with the distribution and receiving the items.

“We are very fortunate to be in this community, not only from the people putting these boxes together, donating their time to pack, to deliver and to pick up have been very, very supportive,” Rooney said. “We have an array of families that we have been able to reach out too and it has given us a chance to give back to these families during this challenging time and they are so appreciative and excited to receive this gift.”

Rooney said it is a unique way to bond the community together during the holiday season. She said everyone is chipping in to help with the donations. 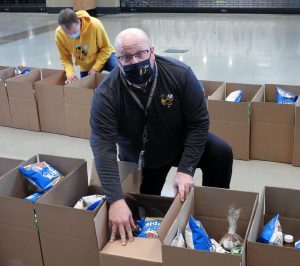 “It’s that time of the year where everyone needs a little pick me up. Sometimes, giving back is as good as receiving,” Rooney said.

“There were a lot of smiles,” Rooney said. “It was great to see kids run to the window and want to throw some snowballs at the Yellowjacket and play around. There were a lot of Thank yous and smiles and compliments about our school district.”

Rooney said the holiday food box distribution went a little differently than the Thanksgiving event. Instead of surprising the families, they were notified in advance due to the number of items that will be distributed throughout the district.

“We met as school staff and selected some families from unique needs and wants,” Rooney said. “It’s a pretty fantastic opportunity for all.”

Rooney said it is a tough time of year with the pandemic and with kids being home a lot more. She said families are thankful. Rooney said this is an event she thinks will continue in the future.

“We couldn’t do it without that community support,” Rooney said. “I just think it’s a way to give back to some of these students and families who trust us with their kids and help keep our community going. It’s a wonderful way to give back.”

Rooney said it is amazing to see the community come together during this time. 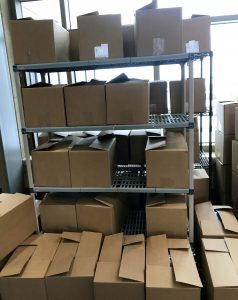 “The school staff has been unbelievable. We had a lot of staff come together to help. KLN has volunteered to make these boxes. It’s not just one little box, it’s a big donation of food and extra surprises along the way that we can give these families on Dec. 22,” Rooney said.

Rooney said the boxes will have a ham, frozen chicken breasts, potatoes, carrots, canned fruits and vegetables, cake or pie, breads, buns, cranberries, gravy, 2-liter of pop, juices and KLN items such as licorice and caramels, among other items.

Rooney is grateful for the help from the community and is thankful for the donation from the anonymous donor.

“I wish everyone could be in my shoes and be able to have the gift of giving them to these families and making these calls, because it is a pretty cool thing for me to do on this end,” Rooney said. “I want to thank everyone for helping out. No one person can do this alone. It takes a village and I’m proud to be a Perham Yellowjacket. I appreciate everyone’s support.”