Before heading to the 2022 Minnesota School Employees Association’s Delegate Assembly, Perham Public Schools Pam Ehnert was confused. Usually, she is a member of the Sue Ezell Leadership Award (SELA) Committee. However, this year she wasn’t and it was kept quiet from her on the reason why. That reason was she was nominated for the award and eventually selected as the recipient of the Sue Ezell Award.

Each year, the MSEA chooses one member who has demonstrated outstanding service and leadership to receive the SELA. 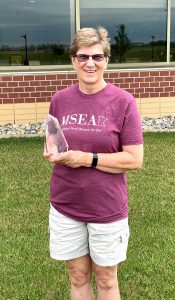 Ehnert said she was surprised and humbled to be nominated and to receive the award. Ehnert has been with Independent School District 549 since 2004.

“(It was) very humbling. I wasn’t expecting it,” Ehnert said. “It was a great honor to receive the award and even to be nominated by all of those groups.”

“The SELA is the highest honor an MSEA Member can receive, which is presented to the chosen recipient each year at the MSEA Delegate Assembly” Woodford said. “Pam’s dedication to Perham’s students, staff and community is the embodiment of MSEA’s Member of the Year Award.”

Perham Public Schools Facilities Director Russ Winkels said Ehnert’s pleasant personality and a positive attitude makes her work environment fun for everyone she works with. He added she is very organized and prepares for upcoming events days in advance.

“Her position at our high school where she opens the school each morning about an hour before most staff arrive is evidence of how she does her duties,” Winkels said. “Many students come to school early for various reasons and she makes sure they have a safe and clean place to prepare for their school day.”

MSEA did a good job of keeping the secret from Ehnert. As a past committee member, Ehnert was wondering why she hadn’t heard anything prior to this year’s Delegate Meeting. She said the moment hit her when she arrived and they put a corsage on her.

“You are just like wow, because there are a lot of people in the union and it was down to three,” Ehnert said. “It’s very special because (Sue Ezell) was special and just to be recognized for that is very nice.”

Ezell was one of the “Founding Mothers” of the MSEA as well as the St. Cloud Paraprofessional bargaining units. She served on the Board of Directors and two terms as President of the MSEA. She passed away in 1990 after a battle with breast cancer.

Ehnert has served several different roles within the MSEA for Perham Public Schools. She has been the Chief Steward, Vice Steward, Delegate/Alternate, Negotiation Team, Building Representative and is now going to be the secretary/treasurer.

In her nomination letter, Perham Public Schools’ Sue Fresonke said Ehnert is an example to her co-workers of what a dedicated, caring, employee is. Fresonke stated if one of Ehnert’s co-workers needs help, she doesn’t hesitate but helps to get the job done.

Ehnert said one of her favorite things about Perham Public Schools is working with the staff and students of the school. She said it was really nice to be nominated and nice to hear that people notice her hard work as she is one that is usually behind the scenes of the school district.