Bjerke excited for new role, remain with the district

Bjerke excited for new role, remain with the district

There were some big changes announced at the Prairie Wind Middle School (PWMS) when James Kennedy was named the new Building Principal on June 8. One of those changes was former principal Scott Bjerke resigning from his post and accepting the position of Associate Principal/Dean of Students at the Heart of the Lakes Elementary School.

Bjerke has been the principal since 2008 and has been looking at a few different options for his future. WIth the principal opening at the HOTL, Bjerke and Superintendent Mitch Anderson met about the possibility of filling Bjerke’s spot a year early and having him stay on board as a mentor for the two new principals. 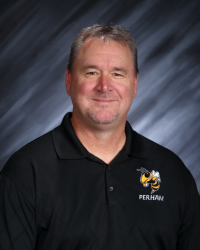 “It would be nice to have a mentor for these two new principals and at the same time, I can help with teacher evaluations and be the Dean of Students at the elementary school and take on a variety of different roles,” Bjerke said. “It’s nice to have a change of scenery and hand the reins over to somebody else. I’m looking forward to something different and a change of scenery and still be around kids and teachers. That’s what my gig is and what I like to do. It’s going to be hard to leave middle school altogether.”

Anderson said Bjerke has led by example in creating a positive climate and culture at the middle school. He added staff and students enjoy walking into the building every morning.

Anderson said while his position may be changing within the district, he is happy that Bjerke will still be working with ISD 549. “It’s a great opportunity for our two new principals to have a ‘go to’ guy like Bjerke to help them navigate through their first year as principals.”

Bjerke said he was grateful the Independent School Board 549 and Anderson are giving him this opportunity to try this position out for a year. Bjerke also thanked the school board for allowing him to be the principal for more than 10 years. Bjerke started his career with the Perham Public Schools as Dean of Students at the High School, before transitioning to his role as principal.

“It’s been an eye opener but it’s been one of the greatest things that has happened to me in my life and my career,” Bjerke said. “I had a good career in Fergus Falls the first half of my career and the second half in Perham has been even better.”

Bjerke said he inherited an awesome staff at PWMS and throughout the years he has been able to hire some people that have helped continue with the solid culture at PWMS.

“It’s fun coming to work and dealing with kids of this age; there is never a dull day,” Bjerke said. “I’m going to miss the heck out of the kids and the teachers but at the same time, I still get to come over a couple of times a week and maintain those relationships.”